NetShare was the first application that gave users a taste of internet sharing/tethering (if only for 20mins), and now PDANet delievers the whole package. Apple’s app store it would appear does not allow applications to be sold on their store that allows tethering, software that basically turns your iPhone into a modem. NetShare got on to the store but was taken down, then put up again and finally taken down for good. Other applications have been released available to people who have jail broken there phone via Cydia. These included iPhoneModem zsrelay and iPhoneModem by Addition. These both work via a protocol called socks 5 which works like a proxy. It requires you to setup socks 5 info in your programs that use the internet (such as Firefox) or installing an application that will re-route all the internet traffic for all programs on your computer for you. Both of these things require some work and in many cases don’t work in a lot of configurations. PDANet is different however, read on to find out why.

PDANet basically turns your iPhone into a wireless router, and the best thing is your computer can’t tell the difference. This means all your browsers, programs, games etc will all works straight away without any configuration or additional software. The steps are simple.

Internet will work immediately on your computer! Just make sure you turn off auto lock (this will kill the connection) and plugin your iPhone as this will sap your juice.

Click on the thumbnails below to see PDANet in action. 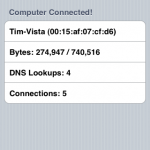 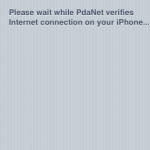 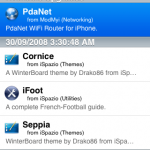 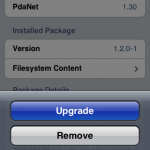 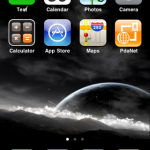 5 thoughts on “True modem for your iPhone, internet sharing for your computer”